Are you ready for some two-fisted science adventure? Then it's time for the Atomic Robo RPG! Have you ever wanted to face down global conspiracy as an immortal atomic robot or Carl Sagan? The Atomic Robo RPG makes it possible.

The Atomic Robo RPG brings you the most explosive Fate Core System experience yet. This is action science like you've never seen it before, coming straight at you from the pages of the popular Atomic Robo comics by Brian Clevinger and Scott Wegener. Play as an Action Scientist or immortal robot, super-spy or pulp adventurer—or something stranger still from the hidden corners of super-science!

This is multi-era, pick-up-and-play gaming at its best: get playing in ten minutes, or take your time and make the most of behind-the-scenes rules for added depth. Hop into your Tesladyne jet and travel the globe in one time period, or battle across the decades as a cast of scientifically talented adventurers. Face down demented dinosaurs, rogue government agents, and stolen Tesla-powered technologies!

Are you Action Scientist material? Grab your gear and get ready for full-contact, high-octane, explosive hypothesis testing!

In order to download this game you must purchase it at or above the minimum price of $15 USD. You will get access to the following files:

Atomic Robo is a Fate-engine pulp-science RPG based on the world of the Atomic Robo comic.

It's 322 pages with clean, readable layout and a ton of very good art, and it uses comic panels to help explain key game concepts, which is a nice touch. Fate's also an extremely easy system to learn and teach, although the engine struggles slightly when a game wants to be crunchy.

Lore-wise, Atomic Robo's setting is a treat. The core gimmick of the world---super-science and long-term conspiracy are the near-universal default for human activity---makes for an environment that feels like Hellboy with the wackiness turned up a notch. As such, there is an abundance of possible plot hooks, and it's hard not to think of ways to escalate situations. This in turn dovetails really well with the escalating tempo that Fate likes to have for its gameplay, making for excellent synergy between the system and the setting.

Put another way, this game zips along at a quick pace---and so does the writing. Despite the book being quite meaty, it reads fast, and the writing is engaging and fun. You don't need to have read the comics to get into the setting---the book provides a thorough overview---and there are a lot of cool details and little flourishes that lend themselves well to roleplaying prompts.

Mechanics-wise, Atomic Robo wants to get a bit more crunchy than base Fate. If you're familiar with Fate Core, you'll have an easy time picking Robo up, but there are still some notable changes. For one, Skills are grouped into Modes, and start at the level of their Mode. Increasing a Skill above Mode requires Focusing it. You can also have a Skill in multiple Modes, which gives it further bonuses. Aspects are also grafted onto Modes, which sort of neatly links all of Fate's core mechanics, but definitely adds to the system's complexity.

Character creation comes in three approaches, an easier one, a more complex one, and an option to split the difference between the two---however these all felt a little difficult to me. The complex one pops the system's hood a bit more, and you can see why the individual pieces work the way they do, but neither is as simple as making a character in Fate Core.

Still, I don't think Atomic Robo's character creation is too hard to learn. Moreover, its crunch tempered by the flexible Fate engine might make it an ideal game for groups who have played DnD and want to check out other systems.

On top of this, the book is pretty jammed full of solid advice. It's easiest to notice in the GMing section, but basically everywhere in the PDF the text is explaining how and why things work the way they do, and giving hints and examples for how to get the most mileage out of your game.

Overall, if you like wacky pulp, if you like games with a strong sense of pace, if you want something that isn't completely freeform or overwhelmingly crunchy, or if you just like Atomic Robo's world and want to do some storytelling in it, I'd recommend picking this up.

There are a lot of great Fate games out there, but I still think this is the best one.

+ The setting of the Atomic Robo comics is incredibly fun, and the comic art used to illustrate the book is excellent.

+ The rules are explained in a tone that is conversational yet specific, and illustrated with comic panels to show how the game emulates its genre.  IMHO this book is the best way for new players and GMs to come to grips with how fate works.

+ It also introduces new, valuable mechanics to the Fate toolbox.  There are rules for superpowers, inventing new tech (which can also be used for rituals or long-term projects), and improvising solutions to mysteries.  Additionally, many of these are tied to being good at science, so less action-oriented characters get to do lots of cool stuff!

- The only complaint I have is that so-called 'EZ character creation' is actually kind of confusing in practice, at least the first time!  Still faster than most other RPGs.

Heyyy just happened upon this and had to say thanks for the kind words! 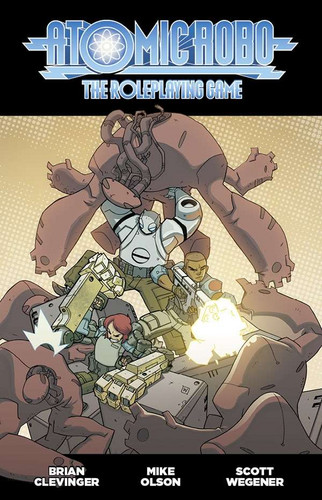