The deadly Doctor Methuselah seeks to unravel time itself with his solution to the Eternity Equation... Gorilla Khan stalks Africa from conquered Atlantis... Mad scientists, strange sorcerers, and power-hungry dictators all seek to undo the fate of humanity. It's the final century of the second millennium – and you are our last hope!

Spirit of the Century is a complete, stand-alone pulp role-playing game based on the award-winning Fate system (Indie RPG Awards include: Best Free Game of 2003, Best Support, and Andy's Choice). Spirit features a heavily revised, revisited, and reimagined vision of Fate. Character creation can be done as quickly as a few minutes, or expand to take up an evening; adventure design is a snap with three methods for creating relevant, flavorful, player-focused stories at a moment's notice. Spirit's mission is to deliver an evening of fun, a "pick-up" game that requires little preparation, but provides hours of entertainment.

All you will need to play are some friends, some dice, and this book.

What People Are Saying

"Spirit of the Century is by a wide margin the best pulp game I've yet read, and yes, I do include the one I co-developed in that. Spirit builds with flair and intelligence on its predecessors, including Adventure, transmuting good intentions into brilliantly smooth execution. It is a beautiful little volume, well-written, entertainingly illustrated, and full of the fun. If you like to play pulp adventure roleplaying, then you want to check this out. Trust me on this: I repeatedly had the thought, 'I wish I'd done it that way', 'I wish I'd had that idea', and so on. It's great stuff."

"For those of you who long to fight gorilla assassins on the back of a bucking zeppelin, Spirit of the Century is the game you've been waiting for."

— Ken Hite, in his Out of the Box column (Source)

A Pyramid Pick! "Above all, after reading Spirit of the Century, I want to run and play the game, its mechanical simplicity and the generous advice only making the prospect easier and almost intuitive. Spirit of the Century exuberantly exemplifies the pulp genre, and is not only the best Pulp RPG of 2006 and best Pulp RPG in a long time, but one of the best RPGs of 2006."

"I am reading Spirit right now, and my jaw has not left the floor. There are eleven good ideas on every page, and it is *all* laser-focused on actual play. That's why it's so long. Every single thing is immediately tied into real play, and how to make game play better. It's a killer, killer book. I stole liberally from Fate when I wrote Agon (mostly by way of TSOY), but now I'm wishing I had read SotC before the stealing began. So much goodness! Damn."

"For me, this is the best RPG of its type on the market. I have not been so excited about an RPG in some time. SotC is both a narrowly focused RPG and an excellent toolkit for a variety of other games. ... I feel like the GM advice showcases the very best advice the RPG community has learned over the last five years, making this a product that embraces fun at every stage while casting off some of the older notions about how roleplaying games are meant to be structured. I have never read an RPG where the advice on running the game was as consistently good as this advice is."

"I would go so far as to say that Spirit of the Century manages to do everything that Adventure tried to do, and does it better."

"Out of all the mainstream or indie books I've ever owned, no other company or designer has ever, EVER put as much time, thought and energy into making such a helpful section. The advice is universal (save for the one section on specific pulp games), it is solid, it is a MACHINE for producing GOOD GMs. I seriously want all the other players at my table (especially the Other GM of my weekly gaming group) to buy this game so that they can see this adivce as well. Not even in those mid-late 90's 'Mostly GM Advice' supplements (Listen Up You Primitive Screwheads, La Comme Il Faut, etc) have they even come close to scratching the surface of what Spirit of the Century covers in some 60 pages. This is a book that every GM should have on their shelf, and a book that has raised the standards. 'Oh, you didn't understand how to run this game? Well, you didn't try hard enough/You just don't get it': This sentence will never be able to be levelled again, as it's clear that it IS the designers' job to make the reader into a better GM/player, and it's also clear that there are real tools and explanations that can be leveraged to do so."

"I'd heartily recommend the game to anyone with an interest in Pulp adventure, or in cinematic role-play in general. The system is Superb, the Setting Great, and the game overall verges on Fantastic."

"We were finally able to get together to play our first full game of Spirit last night and it TOTALLY ROCKED! It was the most fun I've ever seen playing an RPG. The players really got into being able to personally mess with the story, and combat is the most colorful I've seen. This is a fantastic new direction for FATE!"

"These guys just plain Got It. Gentleman, you have definitely raised the bar."

— Ryan Macklin of the Master Plan

Spirit of the Century.zip 47 MB 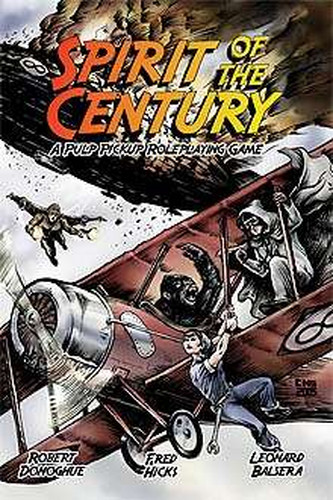