It's a big universe out there, but around every star, on every planet, the old saying holds true... we all gotta eat!

The most influential, inspired, or infamous chefs in the quadrant cook on Uranium Chef, the most popular cooking/bloodsport show on the neutrowave. Tighten your apron straps and hold on tight, as you'll have to survive surprise ingredients, full-contact kitchen combat, and the snootiest food critics in five dimensions. Will you wow the judges and woo the audience? Do you have what it takes to be crowned the new Uranium Chef—or will you get the chop? "Hitchhiker's Guide to the Galaxy" meets "Top Chef" in this new Fate World of Adventure by Dave Joria.

I so very very badly want a physical copy of this.

I've been wanting the "Uranium Chef" setting ever since the random art pages of cooks battling monsters on-set appeared in the Fate System Toolkit, and it doesn't disappoint.

It's a hilarious and energetic romp through reality television, science fiction, competition cooking and interpersonal shenanigans.  Highly recommended, and fun to read all by itself even if you don't wind up playing it.  Plus, it's full of fun inspiration that could be used in other Fate Core + Fate Accelerated games. 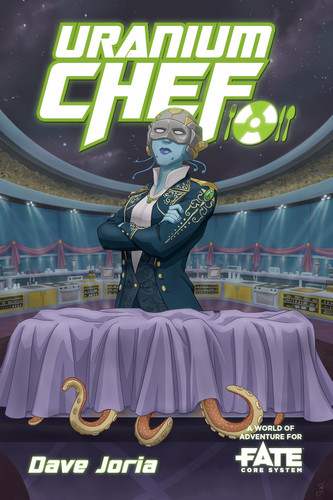